About 20 years ago now, my Irish friend asked me a really interesting question – “what is America?”  What she meant, she explained, was that she was trying to get at some kind of unified-field-theory to sum up America’s identity.

This being a multi-verse of a nation – especially now – that was a impossible question to answer.  But it gave me a great idea for a July 4th observation – every year, I spend part of the day reading books about America’s history and culture and thinking about her question.  I tend towards collections of first-hand source documents, too – anthologies of letters, eye-witness accounts, speeches, and the like – so I always have time for at least something every year, whether it’s just a couple essays read on the subway on the way to a cookout or a couple hours’ worth of reading on a blanket in the park.  I’ve got a big enough library assembled for this, too, that it’s high time I share.

I actually have a new book to crack into this year; will not report on it just yet, I’d like to give it a thorough read first.

A Visit To The Opposite Of The Crash Course 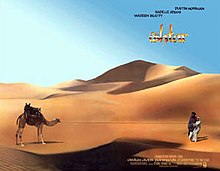 So in the Movie Crash Course I’m watching films that are critically regarded as some of the best of all time.  So over here, I’m giving a quick nod to a film that for a while has been regarded as one of the worst of all time – Ishtar.

Many of you probably avoided it because of the reputation, so real quick – it’s a combination buddy comedy and action film, with Dustin Hoffman and Warren Beaty playing a couple of outrageously terrible singer/songwriters who somehow get caught up in a murky spy plot in a fictional Middle East country.  I think there was also something involving…a hunt for treasure and a camel?  Something like that.  It’s a completely ludicrous plot, with most of the comedy coming from the whole fish-out-of-water element of the songwriters “Rogers and Clarke” blundering through international incidents, and also from seeing Hoffman and Beatty really lean into the “these guys are terrible” aspect.

Ishtar famously tanked – and let’s be real, the plot is ridiculous.  But I always felt like it never deserved the depth of the vitriol it got.  I would always admit to saying that “I kinda liked Ishtar” with a bit of an embarrassed and sheepish look.

Suddenly, thirty years later – we’re starting to see a bit of an Ishtar renaissance, with the film being featured as part of a salute to director Elaine May at New York’s Film Forum center. And this weekend, the Public Radio program Studio 360 is airing an analysis of the film and its critical response, suggesting that it didn’t get a fair shake in the press.

And I’m seeing this and looking back at 17-year-old me and feeling vindicated.