(Note: I have edited this post since its original posting. All such after-the-fact edited posts are indicated with a “Directors’ Cut” tag.)

The Great White Silence was filmed by Herbert Ponting, the official chronicler of the United Kingdom’s doomed Terra Nova expedition to the South Pole in 1910.  The Terra Nova team, lead by Royal Navy Officer Robert Scott, set out on a quest to be the first to reach the South Pole.  After a year of training and preparation in their base camp in Antarctica, Scott set out with four teams of four men each; three of the four teams would be setting up supply depots for the polar team for their return trip.  Scott reached the South Pole with three other men in early January of 1912 – only to discover that the Norwegian explorer Roald Amundsen had beaten them all by about a month.  Severe storms slowed them on the return trip, and all four men who reached the pole eventually froze to death on the way back to base camp. 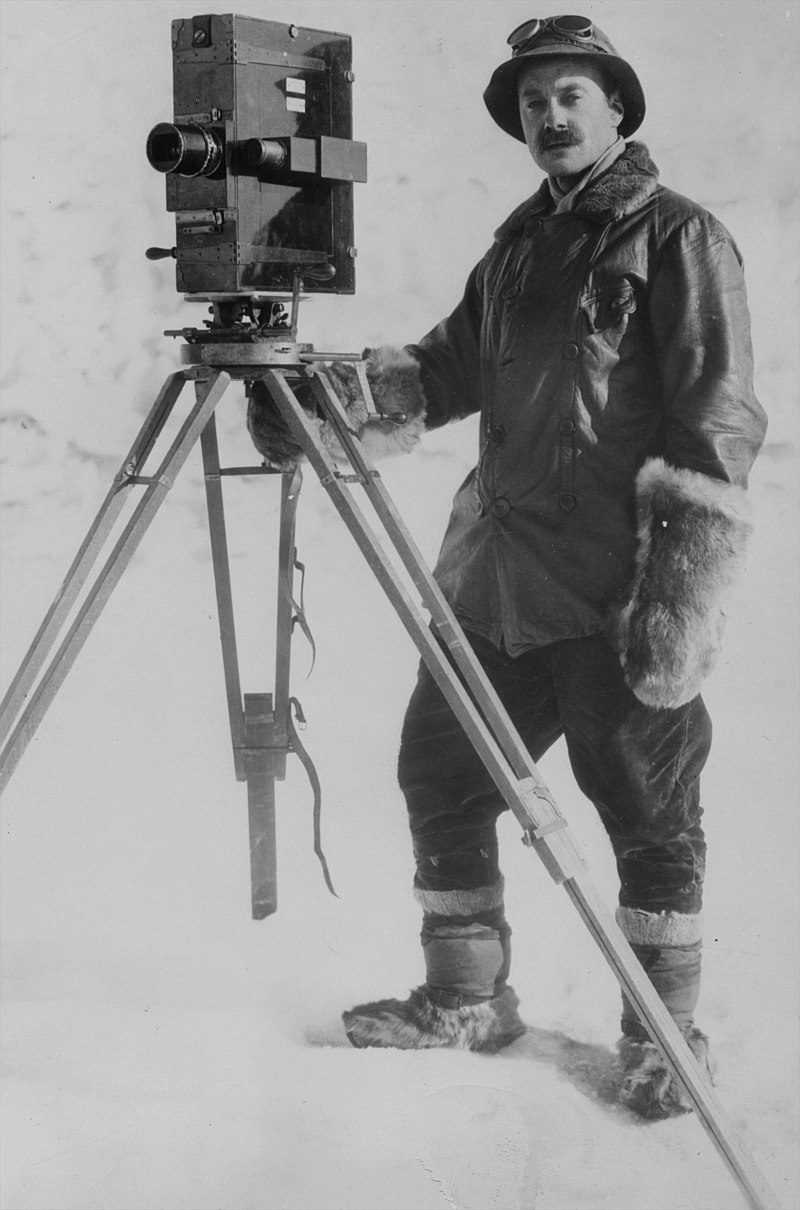 Ponting managed to escape all of that.  He was some years older than the others in the expedition, and Scott therefore asked him to stay behind on base camp.  Ponting didn’t seem to mind; while the others had been preparing for the expedition, Ponting was filming absolutely everything he could – well aware that his footage would be the first glimpse of the Antarctic that anyone back in England would ever see.  In fact, most of the film is taken up with Ponting’s footage of seals, killer whales, and penguins.

Ponting also had a chance to capture some of the stunning scenery – vast ice caverns and enormous snow dunes – that dotted the ever-shifting landscape. 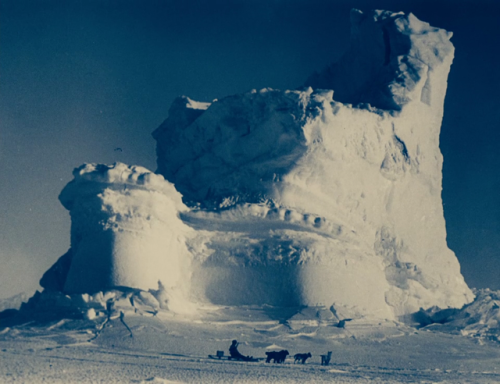 Ponting also showed a lot of the daily activity for the crew of the expedition proper, as they cared for the horses and sled dogs or practiced skiing.  The men (and animals) don’t seem to be aversely affected by the polar weather, strangely; in fact, most of the time they seem to be having a lot of fun.

The crew even has time to goof off – Ponting captures one of the men showing off how he’s trained the crew’s pet cat to jump through a “hoop” made by his outstretched arms.

(Fair warning to anyone tracking down the film: the name the Terra Nova crew chose for their all-black cat is one that we would consider wildly inappropriate today.)

Ponting even turns the camera on himself. After some breathless footage of the ship plowing its way through pack ice in the Antarctic sea, the film cheerfully adds a still photo of Ponting, filming while lying precarioiusly on a gangplank – “Here’s how I got that shot!” the narration relates. 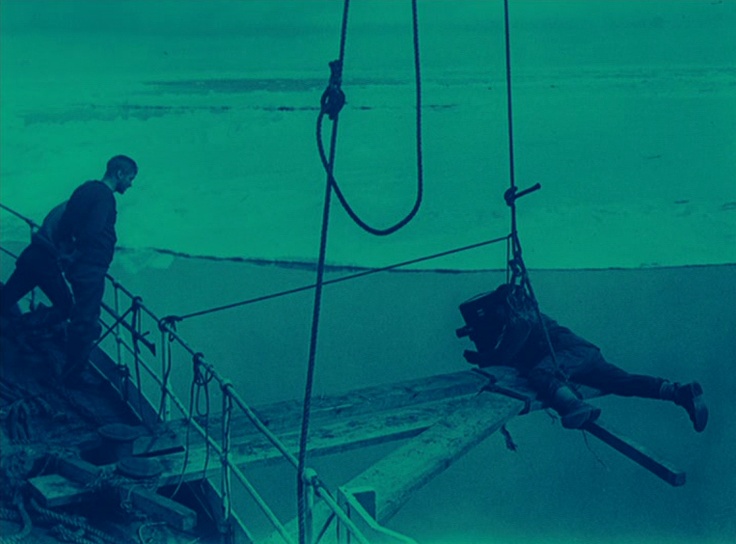 The bulk of the film is so happy-go-lucky, in fact, that I started wondering if Ponting was even going to address the death of Scott and his crew.  But there’s a reason for that; he left Antarctica before the news of Scott’s death broke, setting up a studio in New Zealand to turn the film into a fundraising campaign for future expeditions.

When he heard the news of Scott’s death, however, he turned the last act of the film into a memorial.  There was no footage from the final expedition, of course, so he mixed in photos he’d taken from base camp, animated lines on a map to trace the team’s steps and paintings depicting the imagined deaths of each team member. He returned to Antarctica once to capture a photo or two of the snow cairn covering Scott’s remains. 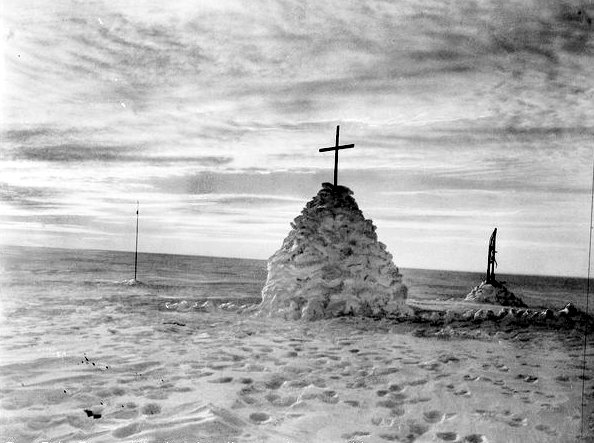 Instead of giving us dazzling footage of natural wonders, and Ponting’s breathless excitement, the last reel is understandably dour. The intertitles dwell on the nobility and bravery of Scott’s team and their acceptance of impending death; but it’s also where Ponting turns to the danger of the Antarctic, quoting from Scott’s diary on the date he reached the pole: “Great God! this is an awful place….”

The most poignant story Ponting tells is of Captain Lawrence Oates. I’d heard his story before; he developed severe frostbite in both feet on his way to the Pole, and his injuries slowed the team’s return considerably. Several times he asked the team to just leave him behind in a tent and go on without him, but the others would have none of it.  Finally, one night, as the team was hunkered down during a heavy blizzard, Oates struggled to his feet and calmly told the others: “I am just going outside and may be some time.”  He then walked out into the storm, never to return.

Instead of raising funds for future expeditions, Ponting’s film became a tribute, used to drum up funding to support the widows and children of Scott’s team.

(P.S. to those visiting from Moon In Gemini’s Winter In July blogathon – welcome! This is part of my blog’s quest for me to watch and review all of the movies from the 1001-Movies-To-See-Before-You-Die books in order.)