Movie Crash Course: Within Our Gates

(I’m working my way through the critically-selected 1001 Movies You Must See Before You Die, watching them all in sequence or as close to sequence as I can get.) 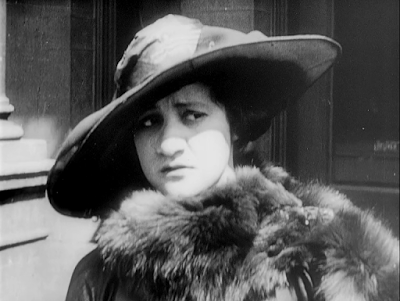 There is some debate as to whether Within Our Gates was intended to be a response to D.W. Gtiffith’s Birth Of A Nation.  It almost certainly is a response to the world wrought by the Klan, however, and the Jim Crow era.

The story mainly follows the tale of Sylvia, a young African-American woman from the South. At the movie’s start, she is engaged to a soldier, but her cousin Alma busts up their engagement in an effort to snag the man herself; in response, a heartbroken Sylvia resolves to devote herself to “the betterment of my race” and joins the administration of a small school in Georgia. When the school falls short of money Sylvia ventures north to Boston on a fundraising tour, where she catches the eye of Dr. Vivian, a young African-American also “passionately engaged in social questions,” who agrees to help her in her cause. But Sylvia soon meets a wealthy Bostonian widow who agrees to pledge several thousand dollars to save the school and Sylvia rushes home, money in hand.

Dr. Vivian can’t forget her, though, and sets out to find her. He retraces her steps to find a repentant Alma, who agrees to help the pair reconnect. Before she does, though, Alma braces him with a story of Sylvia’s childhood – she was the adoptive daughter of a loving couple who strove to get her an education, but when her father was framed for the murder of a white man, both her parents were lynched.  This serves to strengthen Dr. Vivian’s devotion, though, and the very last scene features Sylvia and Dr. Vivian in their home in the South, newly married and chatting lovingly.

Considered technically, this is not a perfect film. There are subplots that drag down the story, there are improbable melodramatic twists, and a couple of inexperienced actors (I have to admit, I was kind of glad the film got rid of Sylvia’s initial fiance because the dude couldn’t act). The director, an author and self-taught filmmaker named Oscar Micheaux, also seemed to really like inserting short clips as tableaux, either to show a character’s state of mind or as a flashback or to show contrasting action happening elsewhere. But these tableaux are simply mixed into the film without any kind of clarification, which made for some difficulty following the action in a couple spots (“wait, Sylvia went south, what is she doing back talking to  – ohhhh, gotcha, Dr. Vivian is just remembering that.”).

But those subplots actually have some pretty keen social commentary, particularly when you consider that this was made in 1920.  There is an extended sequence with a travelling preacher, “Old Ned”, whose gospel advocates subservience to white men and a clean life in anticipation of Heaven. There is a scene where Old Ned visits some white men in a quest for donations, and as they reach for their wallets, one asks him what he thinks of the notion that black men should get the vote.  Absolutely not, Ned says, grovellingly adding that he thinks that “White folks is mighty fine”.  But as he leaves, he chides himself – “Again, I’ve sold my birthright. All for a miserable mess of pottage. Negroes and Whites—all are equal. As for me, miserable sinner, hell is my destiny.”

The flashback to the death of Sylvia’s parents has another telling subplot. As the lynch mob is chasing her parents, one man from the mob has been tracking down Sylvia, cornering her in her family’s cabin; the scenes with their murder are intercut with scenes from a grippingly violent attempted rape. But Sylvia’s would-be rapist is stopped by the sight of a birthmark on her chest – for that is how he realizes she is his illegitimate daughter.

The scenes with the lynching are pretty grim as well. We don’t actually see Sylvia’s adoptive parents dying, but by the time they are in their nooses, they’ve been very roughly handled.

There’s an even more graphic tableau earlier. Efram, the man who frames Sylvia’s father, first offers to lead the lynch mob through the swamps where they’re hiding – but the hunt takes longer than planned, and the bloodthirsty mob turns on Efram himself.

It seems that the director was entirely self-taught, and making things on the thinnest of shoestrings compared to other film’s budgets – Micheaux didn’t have enough film stock to do more than one take for each scene, and had to borrow all the costumes and props. Micheaux may not have been as skilled, but he had some things he very definitely wanted to say.